Home Court Advantage: “The Trial of the Chicago 7” and “Honest Thief” 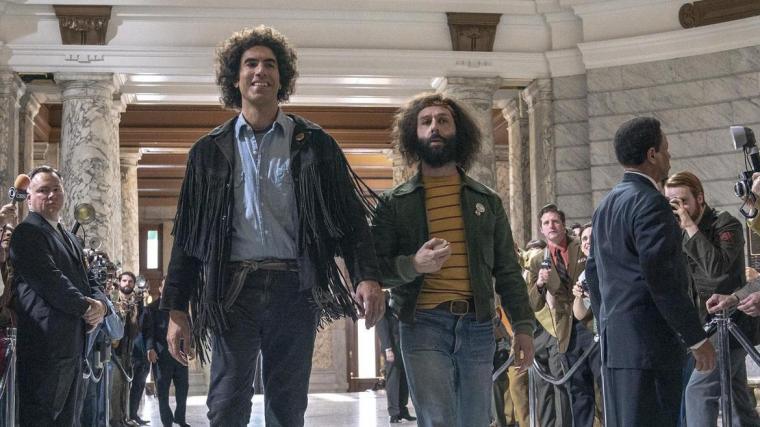 THE TRIAL OF THE CHICAGO 7

Over the past several weeks, a number of news outlets, notably the Washington Post, have published op-eds suggesting that the Academy Awards currently planned for next April be scrapped entirely. Given this pandemic year, the arguments in favor of cancellation can't be completely brushed off: Will there be enough viable contenders? As very few of those contenders will debut in actual movie theaters, will any of them be part of the cultural conversation? At this point, is a live ceremony – even one taking place more than six months from now – in a packed Los Angeles auditorium at all conceivable? If the Oscars did get axed, would anyone care?

With the exception of that last one (“Well, I would!”), I can't answer those questions. But I'm very much hoping that the show goes on regardless of this year's built-in hindrances, if only to see whether the Best Supporting Actor category winds up completely filled with castmates from writer/director Aaron Sorkin's courtroom drama The Trial of the Chicago 7. (The film premiered in a handful of venues several weeks ago and began streaming on Netflix this past Friday.) Such a happenstance would, of course, be an improbability bordering on impossibility. But with the exceptions of 12 Angry Men and maybe the first two Godfather flicks, I literally can't think of another movie so abundant with exceptional ensemble acting in juicy character roles; you could expand the Oscars' Supporting Actor roster from five nominees to 10 and still pack it solely with deserving Chicago 7 performers. Like many Sorkin projects, this one is frequently too glib for its own good, and I think even its most devoted admirers will wish that this material had played out in multi-hour limited-series form rather than over 135 intensely speedy minutes. That, however, might just be my personal greed talking, because I found Sorkin's latest so gripping and so outrageously fun – and leave it to Sorkin to make this subject matter fun – that I never wanted it to end.

To be sure, Sorkin, as usual, has a lot more on his mind here than our mere amusement; if he could conclude every Chicago 7 screening by showing up at viewers' homes with voter-registration forms in hand, he'd no doubt do it. As its title makes clear, the movie chiefly concerns the long legal battle that transpired after the notorious rioting during the 1968 Democratic National Convention, with defendants including Students for a Democratic Society co-founder Tom Hayden, Yippie-movement icon Abbie Hoffman, and Black Panther leader Bobby Seale accused of conspiracy and inciting street violence in Chicago. Sorkin's jam-packed narrative, though, also details the initial preparations for the planned-for peaceful (and less-than-peaceful) protests, and stages the riots themselves, and explores the inner workings of the first few months of the Nixon administration, wrapping it all up with one of those signature Aaron Sorkin dramatizations that puts a lump in your throat while you make immediate plans to visit your nearest polling place. The creator of The West Wing may be shameless, but Sorkin is shameless in pursuit of civic duty, and thankfully, generally speaking, he's one hell of an entertainer. While Sorkin in hectoring mode (as he sometimes was in his TV series Studio 60 on the Sunset Strip and The Newsroom) can be excruciating, he can also, when we're lucky, find the sweet spot between lecture and diversion like no one else in Hollywood.

It's easy to argue that The Trial of the Chicago 7 might be too diverting. A Few Good Men proved that Sorkin has few peers in terms of writing facile courtroom sequences, and when, in this new film, presiding judge Julius Hoffman initiates a routine in which he can't say anyone's name correctly, or Abbie Hoffman – as we're reminded, no relation to Julius – turns the proceedings into an excuse for standup-comedy sets, the superficiality of it all threatens to be wearying. So do his characters' penchants for artificially sardonic conversation and ready-made wisecracks (“He's smarter than you think he is.” “Cows are smarter than I think he is.”), to say nothing of everyone on-screen, regardless of intellect or temperament, sounding equally practiced and slick and verbose – sounding, in other words, exactly like Aaron Sorkin, if perhaps Aaron Sorkin as. (Jerry Rubin, for instance, is Aaron Sorkin as a stoner, while David Dellinger is Aaron Sorkin as a bald, heavy-set family man.) This is one of those instances, however, in which I can see flaws for days and not really give a lick about any of them. Sorkin's astonishing cast just wouldn't let me.

Even when his constant chatter is irritating, Sacha Baron Coen is an impassioned, intensely patriotic live wire as Abbie Hoffman, and he's beautifully paired with Jeremy Strong's Jerry Rubin, an endearing pragmatist under a marijuana-cloud halo. Eddie Redmayne, working against his traditionally simpering tendencies, is a strong, stalwart Tom Hayden, matched in principle and earnestness by Joseph Gordon-Levitt's federal prosecutor Richard Schultz. Yahya Abdul-Mateen II, so incredible in his Emmy-winning portrayal of Watchmen's Dr. Manhattan, is forceful and heartbreaking as Bobby Seale, and particularly wrenching when the Black Panther finds himself, to most everyone's horror, literally bound and gagged in an American courtroom.

John Carroll Lynch, perhaps the most beloved character actor in movies whose name almost no one knows, is customarily exceptional as David Dellinger; Frank Langella steals scenes masterfully as the evidently compromised Judge Hoffman; Michael Keaton, in only two scenes, makes an indelible impression as late-breaking witness Ramsey Clark. And amidst a superlative assemblage that also boasts Kelvin Harrison Jr., Ben Shenkman, Caitlin FitzGerald, John Doman, Damian Young, and Tony winner Alex Sharp, Mark Rylance may be the most welcome presence of all, playing defense attorney William Kunstler with increasingly mournful astonishment as he realizes how unfair his clients' “fair trial” is proving to be. The Trial of the Chicago 7 may not always work, but Sorkin's ridiculously inspiring collection of actors consistently does, and even if you detest its politics, the movie is more than worth a look – I'm on viewing three so far – as a master class in ensemble performance. That's a category the Academy Awards haven't yet adopted, but Sorkin's achievement makes a damned fine case for one.

In the new cineplex action thriller Honest Thief, Liam Neeson plays a career bank robber who falls for Kate Walsh and decides to turn his life around. He contacts the FBI to hand off the $9 million he's stolen over the years in exchange for a reduced sentence. Agents played by Jai Courtney and Anthony Ramos consequently decide to steal the money for themselves. Neeson decides to get even. And as innocent victims got shot and Walsh got beaten up and car chases took place and pipe bombs were fashioned and Neeson's eyes gleamed with ever-escalating rage (a Neeson specialty), it took all my will not to fall into a catatonic stupor from which I was afraid I might never return.

I want movie theaters to stay open. I really, really do. But man how movies these days are making me forget why. Directed by Mark Williams with professional skill and absolutely nothing in the way of invention, Honest Thief isn't that bad, especially when considered in the canon of Neeson's umpteen other offerings whose posters showcase the Grumpy Gus wielding a firearm. (I'm tempted to credit the film's PG-13 rating for making it tolerable, as this one is at least a lot less crass than traditional Neeson-with-a-gun fare.) But scene for scene, there's nothing at all surprising, exciting, or memorable about any of it, and certainly nothing worth a drive away from the comforts of your home where you could watch, say, The Trial of the Chicago 7 and get infinitely more out of the experience. If cineplexes, in the wake of the pandemic, do end up closing shop for good, it won't be because potential blockbusters such as Dune and the Ghostbusters and West Side Story remakes and the new James Bond all headed for the presumably safe hills of mid-to-late 2021. It'll be because most of the options we are getting these days are so forgettably, relentlessly middle-of-the-road that there's no true impetus for seeing them on either big or little screens. Upon learning of her Honest Thief's former career as a safecracker and discovering that her own life is now in peril, Walsh looks out the car window and mutters, “I don't deserve this.” You sure don't, Kate. None of us do.