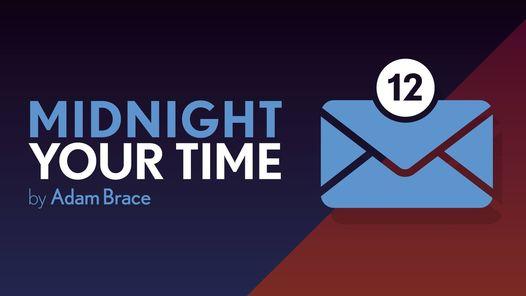 The recipient of four-star reviews from The Guardian, Metro, and Arts Desk magazine, playwright Adam Brace's one-woman drama Midnight Your Time will be available from November 13 through 22 in a virtual presentation hosted by Iowa City's Riverside Theatre, the entertaining and profound 30-minute monologue described by The Guardian as a work that “adapts so well for the screen that it could have been written for the medium.”

In the solo piece, the play's one character – the middle-aged mother Judy – is in London while her daughter Helen is in Palestine. But being 3,000 miles away in a conflict zone doesn't mean that they can't have their weekly mother-daughter chats. The problem, however, is that on this particular occasion, Helen doesn't seem to want to answer the call. A theatrical work that speaks to this present moment in which we can be connected like never before yet still feel so alone, Midnight Your Time has been the beneficiary of rave reviews, with author Brace described by The Scotsman as “a skillful writer able to treat his characters with great empathy but not shy away from robustly criticizing them.” The Guardian, meanwhile, called Midnight Your Time “a quietly tragic portrait of older motherhood and a reminder, in our socially isolated times, that distance from those we love can be just as abject when it is existential, not physical.”

With the play's virtual presentation directed by Riverside Theatre's Producing Artistic Director Adam Knight, Judy is portrayed by Jody Hovland, the venue's previous artistic director of 34 years. She earned her MFA from the University of Iowa and served as a longtime artist-in-residence at Cornell College, and lists more than 200 professional productions to her credit. Among Hovland's most notable stage works are: The Glass Menagerie (Amanda), All My Sons (Kate), Death of a Salesman (Linda), Kimberly Akimbo, the world premiere of The Exit Interview (Eunice), and the solo shows The Search for Signs of Intelligent Life in the Universe, The Median Strip, and Shirley Valentine. Hovland is also a member of Actor's Equity, and has directed such titles as The 39 Steps and Tuesdays with Morrie for the San Luis Obispo Repertory Theatre.

Midnight Your Time will be available for streaming from 7:30 p.m. on November 13 until 11:59 p.m. on November 22, virtual-admission tickets are $15, and more information is available by calling (319)887-1360 or visiting RiversideTheatre.org.

The Reader has long prided itself on our coverage of the area theatre scene. As a matter of fact, before theaters everywhere experienced closures in mid-March, we were the only Quad Cities newspaper publishing any local stage reviews at all. Please help the Reader keep going (and the theatre reviews coming) with your one-time, monthly, or annual support.