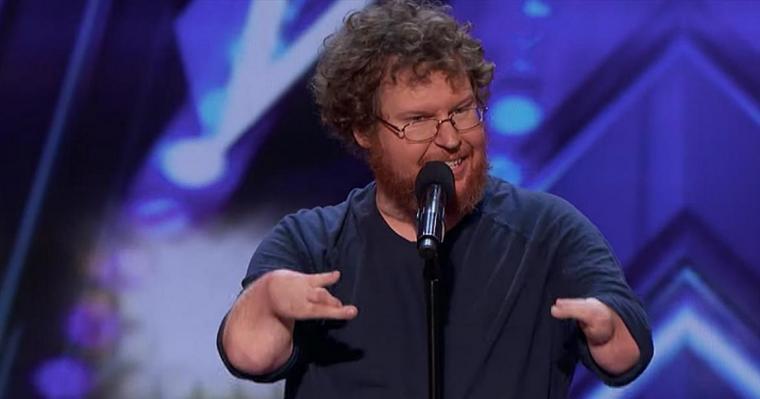 Depite being born with a disability in both arms, Indiana native Ryan Niemiller has been enjoying a fantastically successful standup career that finds the comedian performing at Davenport's Rhythm City Casino Resort Rhythm Room on Novembver 15, the third-place winner on TV's America's Got Talent known for cheekily referencing himself as the “Cripple Threat of Comedy.”

Born with a condition known as Ectrodactyly that resulted in hand malformation in his arms, Niemiller hails from DeMotte, Indiana and graduated from Indiana State University, but launched his professional comedy career in clubs throughout Los Angeles. With his standup routines covering topics such as dating, trying to find employment, and attempting to find acceptance in a world not designed for him, the comedian told the Indianapolis Star, “There’s a lot of my story that isn’t necessarily jokes. There’s a lot of hardship and things I had to overcome that isn’t quite the same style of funny.” That didn't prevent Niemiller, however, from auditioning for and receiving a spot on the 14th season of NBC's America's Got Talent, where he hugely impressed the panel of judges boasting Howie Mandel, Gabrielle Union, Julianne House, and the notoriously unimpressable Simon Cowell.

Niemiller wound up scoring third place in the 2019 competition, and was invited back to the show this past January for the spin-off series America's Got Talent: The Champions. Among the personal statistics Niemiller amassed during his tenure on the program's 14th season, the comedian is: that season's highest-placing non-Golden Buzzer act and highest-placing non-singing act; the fourth highest-placing comedian in America's Got Talent history; the third comedian with a disability to place in the top five; and the only non-singing act that Cowell has voted for over a singing act in the Judge's Circle.

Ryan Niemiller performs his November 15 standup set at the Rhythm Room at 6:30 p.m., admission is $25-30, and more information is available by calling (563)328-8000 or visiting RhythmCityCasino.com.