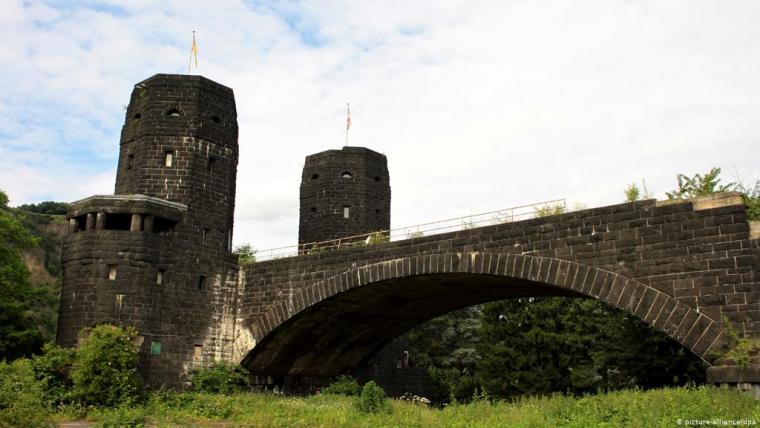 The history behind one of the most famous pieces of European architecture in the final months of World War II will be explored in an online event on November 15, with Davenport's German American Heritage Center and Dr. Wolf Koch presenting Remagen Bridge: A Virtual Lecture, a program tracing the bridge's legacy from its creation to the epic 1945 battle that nearly destroyed it.

Also known as the Ludendorff Bridge, the Bridge at Remagen was, in early March of 1945, a critical remaining bridge across the Rhine river in Germany when it was captured during the Battle of Remagen by United States Army forces. Built during World War I to help deliver reinforcements and supplies to the German troops on the Western Front, it connected Remagen on the west bank and the village of Erpel on the eastern side between two hills flanking the river. German General Erich Ludendorff was a key advocate for building the bridge that was subsequently named after him, and it was designed by Karl Wiener to connect the Right Rhine Railway, Left Rhine Railway, and Ahr Valley Railway and carry troops and supplies to the Western Front. Constructed between 1916 and 1919, using Russian prisoners of war as labor, it carried two railway lines and a pedestrian catwalk on either side.

Midway through Operation Lumberjack, on March 7, 1945, the troops of the First U.S. Army approached Remagen and were surprised to find that the bridge was still standing. Its capture two weeks before Field Marshal Bernard Montgomery's meticulously planned Operation Plunder enabled the U.S. Army to establish a bridgehead on the eastern side of the Rhine. After the U.S. forces captured the bridge, German forces tried to destroy it multiple times.

On March 17, it finally collapsed 10 days after it was captured, killing 33 U.S. Army Engineers and wounding dozens more. While it stood, the bridge and newly established pontoon bridges allowed the U.S. Army to establish a bridgehead of six divisions – roughly 125,00 troops – with accompanying tanks, artillery pieces, and trucks across the Rhine. Capturing the bridge consequently led to a shortening of the war, and after the war ended, the Remagen Bridge was not rebuilt. The towers on the west bank were instead converted into a museum, and the towers on the east bank currently exist as a performing-arts space.

Dr. Wolf Koch's Remagen Bridge: A Virtual Lecture will be presented live at 2 p.m. on November 15 via Zoom, donations are greatly appreciated, and more information on the event is available by calling (563)322-8844 or visiting GAHC.org.