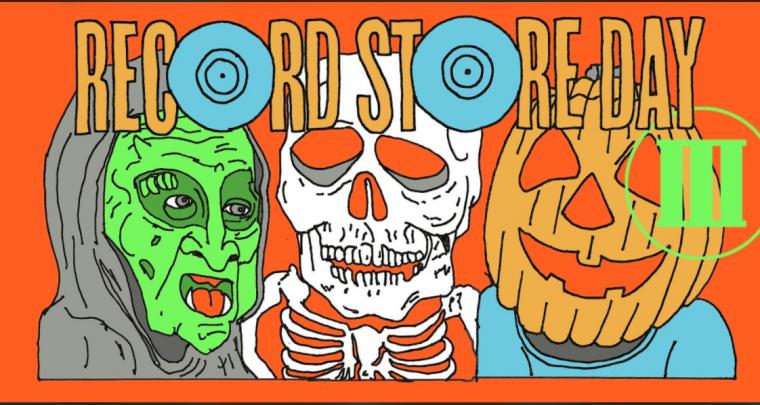 A modified Record Store Day sale is set to take place this Saturday at Ragged Records and Music in downtown Rock Island, with social-distancing measures in place. Vinyl hounds can slake their thirst for limited-edition wax releases and snag some choice discount records in the courtyard; the indoor selection is available for browsing as well, though with only a limited number of customers allowed inside at one time. Masks are required and hand sanitizer will be available, and doors open at 9 a.m. and close at 5:30 p.m.

Record Store Day has become the official holiday of the new record-collecting culture. It is probably the single biggest generator of revenue for the independent record stores that it was intended to honor, as well as a considerable cash cow for major and indie labels alike. Though the recorded music industry as we've come to know it is collapsing, the vinyl record has become its unexpected (if temporary) savior. While sales of physical music media have dropped consistently over the last decade, interest in and consumption of vinyl records has surged.

Nostalgia and desire for high sound quality are major drivers of the vinyl trend, but perhaps the biggest reason for the boom is, as Frank Zappa dryly noted in 1983, "There are many consumers who like to fondle and fetish the packaging while the music is being played." Vinyl records, with their expansive gatefold covers and and retro aesthetics, provide the highest "Fondlement & Fetishism Potential [F.F.P.]" (Zappa again), and the highest potential for profit for an industry in the midst of a slow and painful decline. Ironically, a double-LP sampler of live cuts from his You Can't Do That on Stage Anymore series is among the nearly 100 titles available on Saturday.

It is not surprising that even with no end of the COVID-19 pandemic in sight, the profitable juggernaut that is Record Store Day would not be held back for long. Rather than the twice-yearly bacchanal held in April and on Black Friday, the powers that be elected for three consecutive monthly “drops” on the third Saturdays of August, September, and October 2020. Drop III is this weekend, and Ragged Records and Music is more than prepared. Their partially-outdoor sales in August and September were both successful, and though foul weather may be on the horizon for the weekend, there's no reason to believe it will dampen the will of local record collectors to snatch their prizes.

Record Store Day is not free of the taint of odious consumerism and major-label greed. For every album or rare piece getting a deserved reissue (or first issue), there are often pieces of unnecessary swill. But the holiday benefits from the record store's unique position in commerce. It's not just another store – it's a culture hub. It's a place where like-minded people can meet and hip each other to new (and old) sounds. It's a place where friendships are formed, where local bands can sell their music and advertise their shows.

Independent record stores such as Ragged are among the last bastions of culture where the hand of corporate media has little sway, where an unenlightened browser can pick up information on a new band from a source uninfluenced by advertising money and marketing hype. When you visit and patronize an independent record store such as Ragged, you're helping support a true mom-and-pop business as well as a local music community. And in this case, you're helping a business that needs your help.

Ragged Records and Music has been doing a tidy business since it was opened as a satellite location to Bob Herrington's Davenport shop in Rock Island early last year. In addition to music media, the store has a small but quality stock of guitars, amplifiers and effects pedals, as well as stereo equipment and speakers. Sadly, the twin blows of flood and plague smote the business, forcing multiple changes in plans.

First the Walpurgis floods of 2019 swamped the original Ragged Records on Second Street in Davenport. That location was shuttered permanently; a new store down the block from the old building is tentatively set to open next spring. Since that grim and soggy day at April's cruel end, the Rock Island expansion soldiered on as the sole Ragged outlet, performing admirably until the plague swept the land less than a year later. They've since reopened, doing "regular" business from 11 a.m. to 6 p.m. on Fridays and Saturdays, with limited customers allowed in the store and masks and hand sanitizer required.

This Saturday's event won't just benefit the local record store. Discount records have always been a staple of the business, but the boxes of cherry-picked two-dollar records available in the courtyard this weekend have a special purpose. All proceeds made from their sale will go directly to a fund for close friend of the store Wendy Jean, who is fighting a courageous battle with cancer.

While the customary live music will not be a part of Record Store Day Drop III, neighboring venue, gallery, culture hub and local gem Rozz-Tox will be open from 9 a.m. to 2 p.m., allowing hungry and thirsty shoppers to replenish their energy stores with banh mi and Vietnamese coffee, among other delectables.

The curious can find more information on Ragged's Web site (RaggedRecords.org) and Facebook page. A complete list of this Friday's RSD releases can be found at RecordStoreDay.com, though not all releases may be available. Ragged itself is situated on the far east end of the district, right above Pat Stolley's Future Apple Tree II Studios and just around the corner from Rozz-Tox, and the store can be reached by telephone at (309)788-0898.