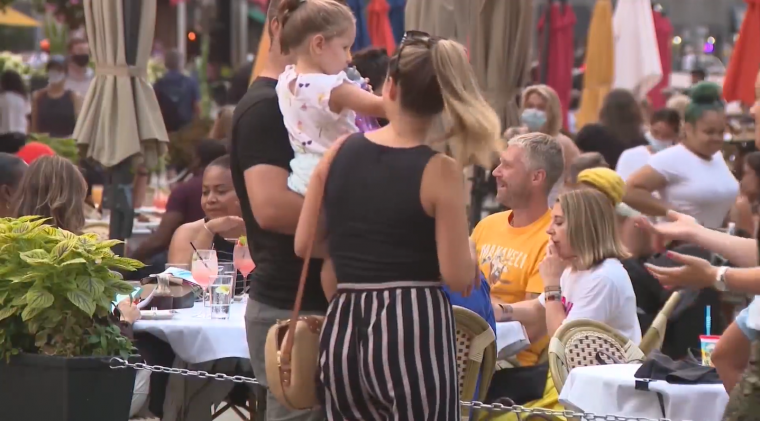 As of October 21, hospital admissions for patients with COVID-like illnesses had increased 75 percent in two weeks within the Illinois Department of Public Health's “Region 8,” which includes DuPage and Kane counties.

As of October 23, only 25 percent of hospital beds in Region 8 were open, down from a third earlier that week. The state's hospitalization “red zone” is 20-percent availability. At that point, regions are automatically put into state mitigation.

The trend certainly does not appear to be our friend. And who knows what the situation is by the time you read this?

Even so, Representative Deanne Mazzochi (R-Elmhurst) complained during a House Republican campaign press conference last week about the state-mitigation measures which will soon be imposed on her home county of DuPage, claiming that “we do not have the same type of crisis scenario that we did back in March.”

Scientists knew very little about the virus in March, so people didn't know quite what to do. Also, the governor has said over and over that he has zero plans to impose another sweeping stay-at-home order, which shut down a gigantic swath of an already-mostly-self-shuttered economy beginning in March.

The new mitigations apply mainly to bars and restaurants, closing indoor service and limiting hours. There is really no comparison between these mitigations and what was imposed in March. Remember when you couldn't get a haircut, or visit the doctor for a routine checkup, have a cavity filled, or hang out with a friend? This is most definitely not that.

Representative Mazzochi went on to declare that the governor is “perfectly happy to wreck what's going on in DuPage.”

Um, even if his secret identity really is a cartoon super-villain, Governor JB Pritzker carried DuPage County in 2018. Presumably, he'd like to win it again. Joyfully wrecking DuPage would serve what purpose? Mazzochi may be spending too much time on social media.

But her reaction is an indication of the influential forces that are being targeted here. Influential restaurant and bar owners don't appear to be willing to take this lying down. Several have made a big public show of remaining open to indoor service in defiance of the new prohibitions.

Opponents of the new mitigations say that bars and restaurants and other venues shouldn't be singled out when the “real” problem is in nursing homes. But these venues are more interconnected than you might think.

“Recent data released by Johns Hopkins University and the Centers for Medicare and Medicaid Services shows that weekly cases in nursing homes rose nationwide in late September as the disease became more widespread in 38 states and the country entered its third coronavirus spike,” the Washington Post has reported.

In other words, if you want to protect Grandma (and a whole lot of other folks), you gotta control community spread. Nursing homes aren't isolated bubbles. Workers, contractors, vendors, visitors, etc, come and go all the time. Whatever is in the community has a good chance of getting into those facilities and then can spread like wildfire.

DuPage County's own contact-tracing shows the second-most outbreaks between September 29 and October 13 were connected to restaurants. The most? Long-term care and assisted-living centers. That's just one of several reasons why the state is focusing on restaurants.

Some folks, including the Illinois Restaurant Association, are referencing some DuPage stats that go back to March to claim that restaurants aren't a real problem. Except, restaurants and taverns were closed for months last spring. Of course they weren't a source.

Countless restaurants and bars are centers of their communities and many of their proprietors are widely respected. Not to mention that the hospitality industry is an incredibly large and important segment of the state's economy.

There is no doubt that some very good, hardworking people are about to face financial ruin, owners and employees alike. And a lot of those owners have relationships with their legislators, mayors, and other powerful types.

Point being, the governor is facing a different sort of challenge than last spring. We were mostly in it together back then. But now the virus is forcing the state to single out an organized, motivated, and influential constituency, and those folks are bound to gain significant traction, especially if heavily-populated suburban Cook and Chicago are put into mitigation.