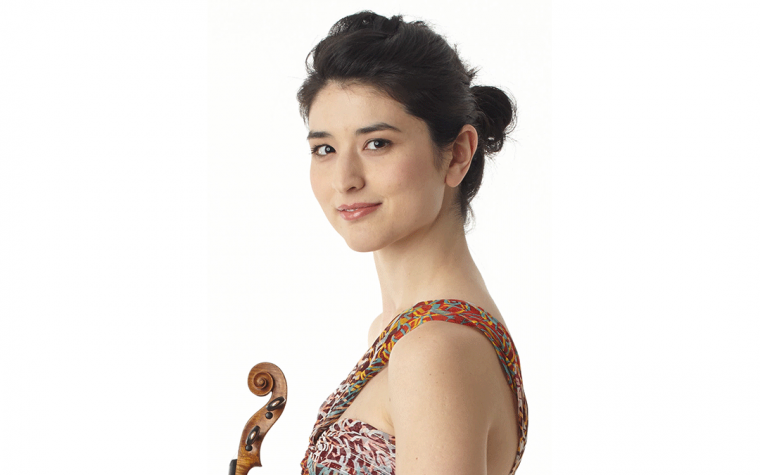 Continuing the musicians' season-long celebration of composer Ludwig van Beethoven's 250th birthday, the Quad City Symphony Orchestra delivers a virtual performance of the second Masterworks program Beethoven Violin Concerto, a tribute to that classic composition – with a piece by Béla Bartók, as well – available for home viewing on November 8.

Canadian violinist and QCSO soloist Naha Greenholtz, who performs on a 1778 Antonio Gragnani violin, was born in Kyoto, Japan, where she began her violin studies at age three. She began her professional career in 2007 with the Louisiana Philharmonic, and later played with the Milwaukee Symphony. Since her solo debut at age 14, the musician's concerto performances have included engagements with the San Francisco Ballet, National Ballet of Canada, and National Repertory Orchestras, as well as the Vancouver, Quad City, Burnaby, and Kelowna Symphonies. In the Madison, Wisconsin area, Greenholtz makes regular solo appearances with the Madison Symphony and the Middleton Community Orchestra, and also maintains an active career as an orchestra musician. In addition to her duties as concertmaster of both the Madison and Quad City Symphony Orchestras, Greenholtz's past performance highlights include guest-concertmaster appearances with the Oregon, Omaha, and Memphis Symphonies, the San Francisco Ballet, and the Calgary and Louisiana Philharmonics, among many others.

In 2019, Greenholtz made her Australian debut in a concertmaster residency with the Australian Ballet in Melbourne, and from 2011 to 2014, she maintained a partnership with the National Ballet of Canada in Toronto, performing and touring frequently with the company as guest concertmaster and soloist. Additionally she has performed often with the Cleveland Orchestra both domestically and abroad, and has participated in music festivals throughout the U.S. and Europe, among them Kneisel Hall (Maine), Taos (New Mexico), Spoleto (Italy), Lucerne (Switzerland), Bach Dancing and Dynamite Society (Wisconsin), and the New York String Orchestra Seminar at Carnegie Hall. Since 2012, Greenholtz has been Artistic Director of the Quad City Symphony Orchestra's Signature Series, and her noted instructors over the years include Donald Weilerstein and Joel Smirnoff at Juilliard and William Preucil at CIM.

The Beethoven Violin Concerto program begins with composer Béla Bartók's light and joyful Divertimento for Strings, and the symphony's celebration of Beethoven's 250th birthday continues with his exhilarating and lyrical Violin Concerto performed by Greenholtz . The digital version of the QCSO's latest concert will air on Sunday via the musician's Uscreen Channel, with only one $38 ticket required per household. Digital access will begin at 2 p.m. on November 8, and be made available to stream for 30 days. For more information and virtual tickets, call (563)332-7276 or visit QCSO.org.